The earned income credit (EIC) has been around for years. But it’s never been worth as much as it will be for 2021 under the new American Rescue Plan Act (ARPA). Some favorable changes are only for the 2021 tax year; others are permanent. Here are the details.

Important: Many people report too much income to qualify for this tax break. Even if you’re not eligible for the EIC, you may have a loved one — such as a child who’s just graduated from college or a friend whose hours and income were cut back during the pandemic — who could benefit from the recent taxpayer friendly changes to this credit.

The EIC is targeted at lower and moderate-income individual taxpayers who work for a living. Importantly, it’s a refundable credit. That means you can collect it even if you don’t owe any federal income tax. In other words, it’s free money.

An eligible individual’s tentative EIC equals the applicable credit percentage times his or her earned income for the year. The tentative EIC is potentially reduced by the phase-out amount to arrive at the allowable EIC.

For instance, under the rules that apply for 2020, your tentative EIC equals:

The phase-out rule applies only if your adjusted gross income (AGI), or earned income (if greater than AGI), exceeds the applicable phase-out threshold. For 2020, the maximum tentative credit is: 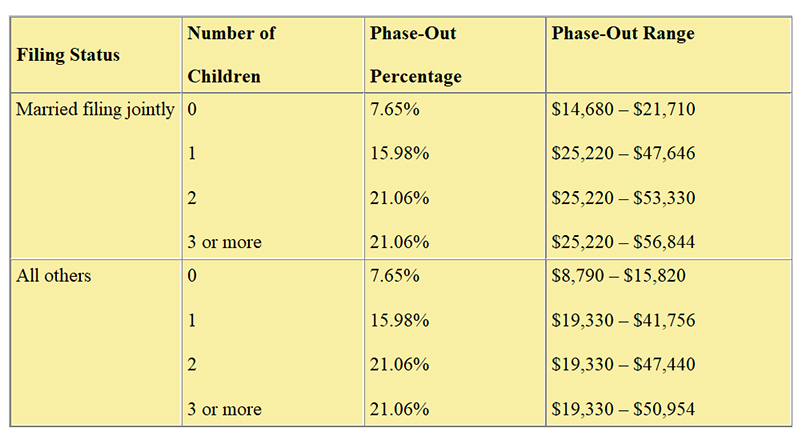 Finally, if you have certain types of investment income over the applicable annual inflation-adjusted threshold, you’re ineligible for the EIC. Before the ARPA, the 2021 threshold was scheduled to be $3,650.

Under the “regular” EIC rules, before the ARPA changes, an individual with no qualifying children had to be at least age 25 but no older than age 64 as of the end of the year in question. Under those rules, if you’re 24 or younger or 65 or older, you’re ineligible for the credit.

For 2021 only, the ARPA contains provisions that make the following taxpayer-friendly changes to the EIC rules:

More generous rules for taxpayers with no children. For tax year 2021, the age restriction for taxpayers with no qualified children is significantly liberalized. For 2021, you generally must be at least age 19 as of December 31, 2021, and there’s no upper age limit. (Under the “regular” rules, people ages 19 or younger and 65 or older were ineligible.) For 2021, the minimum age is 24 for specified students or 18 for qualified former foster youths and qualified homeless youths.

For 2021 and beyond, the ARPA makes the following permanent taxpayer-friendly changes to the EIC rules:

Increased investment income threshold. Under the pre-ARPA EIC rules, you would have been ineligible for the EIC in 2021 if you had more than $3,650 of disqualified income (basically, certain types of investment income). Thanks to the ARPA, you can have up to $10,000 of disqualified income without losing out on the EIC for 2021. For 2022 and later years, the $10,000 limit will be adjusted for inflation.

Liberalized rule for married people who are separated. In general, married individuals must file joint federal income tax returns to be eligible for the EIC. However, if you’re separated from your spouse, filing a joint return may be inadvisable. That’s because filing jointly generally makes you jointly and severally liable for your spouse’s federal income tax misdeeds. Then the IRS can come after you to collect, even after you’ve divorced.

For that reason, pre-ARPA law granted an exception that allowed eligible separated spouses to file separate returns using married-filing-separate or head-of-household status (when permitted), and still claim the EIC. Filing a separate return insulates you from your spouse’s federal income tax misdeeds. To be eligible for this prior-law relief, a separated spouse had to meet certain requirements — including living with a qualifying child and not living with the spouse during the last six months of the year.

For 2021 and beyond, the ARPA includes a permanent change that will allow more married individuals who are separated from their spouses to claim the EIC without having to file a joint federal income tax return. For 2021 and beyond, the new general rule is that a married individual can claim the EIC on a married-filing-separate or head-of-household return (when permitted), as long as a qualifying child lives with the individual for more than six months during the year in question and the individual either:

The rules for claiming the EIC are complicated. But the EIC can provide a much-needed tax break for people under certain circumstances. The rules have been significantly liberalized under the ARPA. Contact your tax advisor to determine whether you or a loved one could benefit from the temporary or permanent updates to the rules for 2021 and beyond.